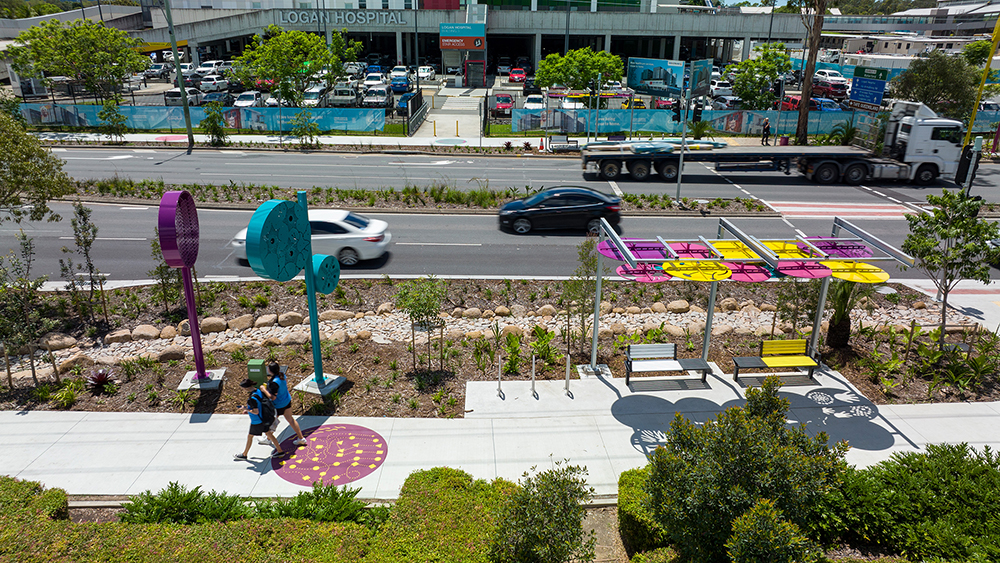 The Stage 1 of Logan City Council’s Loganlea Road Healthy Street project at Meadowbrook has been completed. The project, which included $2.4 million from the Queensland Government’s Unite and Recover Fund, has created safer and improved pedestrian and cycling connections as part of Council’s vision for the suburb to become a major health and well-being precinct.

It also better connects Logan Hospital to proposed medical facilities and the Meadowbrook Shopping Centre on the other side the road.

Upgrades to Loganlea Road include a new off-street shared pathway on both sides of the road, landscaping works, shade structures and a new signalised pedestrian crossing.

Street lighting has been improved and new 24/7 safety cameras are now operating across the precinct.

It has been delivered in conjunction with the Council-led Meadowbrook Partnership Group.

“This project is another example of Council enhancing public spaces for benefit of residents and visitors to our city,” Cr Raven said.

“Meadowbrook is well on the way to becoming a major health hub and these upgrades make it easier and safer for everyone to access the Logan hospital and other nearby health services.”

The project includes artwork along the Loganlea Road footpaths and other parts of the precinct. The art is in the form of installations, shelters and murals painted on the footpath.

Some designs were laser cut into double-sided, brightly coloured aluminium circular discs, which have been positioned along pedestrian thoroughfares.

Many of the artists have exhibited in Logan Art Gallery and some have artwork and street art along pathways and other locations across the city.

“While the safety and access upgrades will be welcomed by those who visit the hospital and other health services in Meadowbrook, the addition of art and placemaking improvements is also important for those who live, shop and work in the suburb,” Cr Hall said.

Stage 2 of the project is expected to include the design and construction of an extension of the shared pathway on the eastern side of Loganlea Road to connect with Armstrong Road.

It will include a new pedestrian bridge to provide safe access to the proposed relocated Loganlea train station.