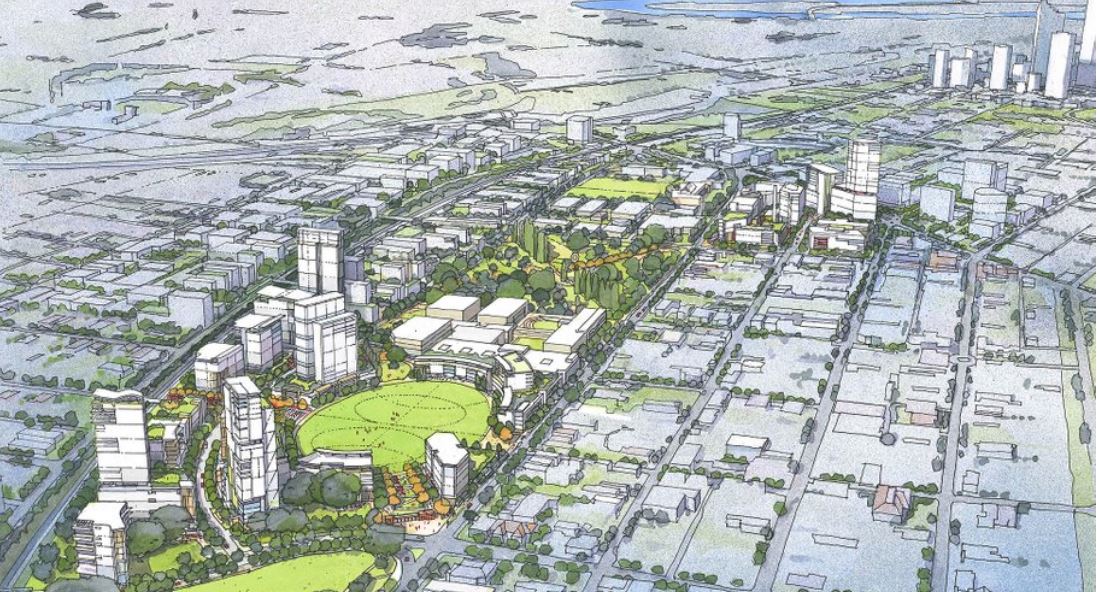 Artist’s impression of the concept for the Subi East redevelopment, via. the Metropolitan Redevelopment Authority.

The demolition of Subiaco Oval infrastructure is progressing with the appointment of R.J. Vincent and Co. (RJV) to carry out the works, following a six-month public procurement process.

The works will remove most of the stadium infrastructure to make way for the future redevelopment of Subi East – one of the state’s most significant urban renewal projects.

According to a ‘Vision Concept’ released by the Metropolitan Redevelopment Authority, Subi East is set to transform 35.6 hectares of land (taking in Subi Oval and the old Princess Margaret Hospital site) into a thriving and connected inner-city hub with strong transport links, walking and cycling paths and a network of high-quality landscaped green spaces.

The stadium’s iconic state heritage-listed entry gates are set to remain and be incorporated into the future development, while the Sandover Medal walk will be carefully removed for future relocation or reinterpretation.

The site’s rich sporting history will be further celebrated by the reinstatement of a playing surface for shared community and school use.

In addition, heritage buildings at the former Princess Margaret Hospital site will be preserved and adapted for future use, while the stories of the Whadjuk people will be recognised and shared throughout Subi East.

Planning Minister Rita Saffioti said more than 100 years after the first game of football was played at Subi Oval, Subi East will see one of Perth’s favourite sporting grounds opened up for all to enjoy.

RJV will now commence off-site works, including the development of management plans in accordance with the approved development application conditions.

On-site works are anticipated to commence once the West Australian Football Commission and their sub-tenants, the West Coast Eagles, have vacated the site.

A community open day has been proposed to take place prior to demolition to provide all Western Australians one last chance to farewell the grandstands.